Both Apple and Samsung are the world's leading smartphone manufacturers, and they have been duking it out on global sales leader boards. Quarter-over-quarter and year-over-year, Samsung has had a death-grip on the number one spot. But in an interesting turn of events, a new report found that Apple took the number one spot for Q4 sales in 2020. Is it clever marketing and sales from Apple that pushed them to the top or just the luck of the draw?


Gartner is a research, advisory, and data collection company for enterprise customers to provide accurate information and insights into many industries. Today, it released a brief report on the smartphone market's current state, which found that smartphone sales declined 5.4% in Q4 of 2020. Samsung, which previously held the top quarterly sales spot since 2016, saw a decline in sales of 11.8%, whereas Apple saw a growth increase of 14.9%. This was just enough to edge out Samsung on the charts and take the number one sales position for Q4 2020. 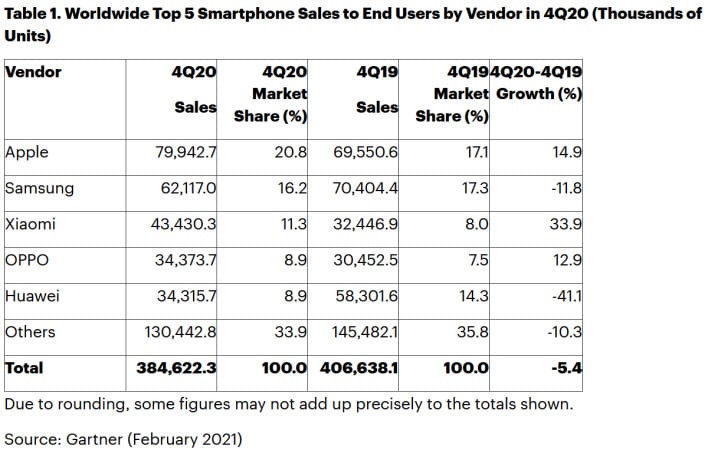 For the year as a whole, smartphone sales dropped 12.5%, likely in part due to financial limitations consumers faced during the year. However, the drop in sales could have been worse, especially in Q4, if it had not been for "5G smartphones and lower-to-mid-tier smartphones minimize[ing] the market decline," according to Anshul Gupta, a senior research director at Gartner. Interestingly, though Samsung saw a Q4 loss on the leader board, it retained the number one sales spot for the year even with a yearly sales loss of 14.6%. Ultimately, Samsung still has a healthy sales lead over Apple, with close to 27% more sales recorded in 2020, but it is interesting to see the gap begin to close. 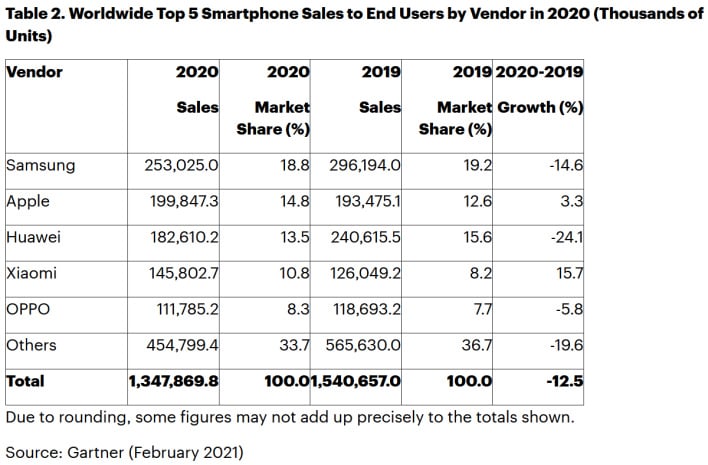 Perhaps this gap closing is partly because of the COVID-19 pandemic forcing people to pay more attention to what they are spending, and Apple customers tend to buy new products frequently. On the other hand, it could just be a fluke situation as Apple released the iPhone 12 series touting 5G in Q4 2020, which boosted its sales. Similarly, Samsung has a Spring release cycle, so at year-end, barring holiday sales, the company does not look as great as others. Furthermore, it helps that there are other big movements in the smartphone market, as "Huawei recorded the highest decline among the top five smartphone vendors which made it lose the No. 2 position to Apple in 2020."

Overall, the only real conclusion that can be taken away from this data is that this has been an incredibly weird year for every market. In any case, it will be something interesting to watch, so keep an eye on HotHardware for smartphone market updates.