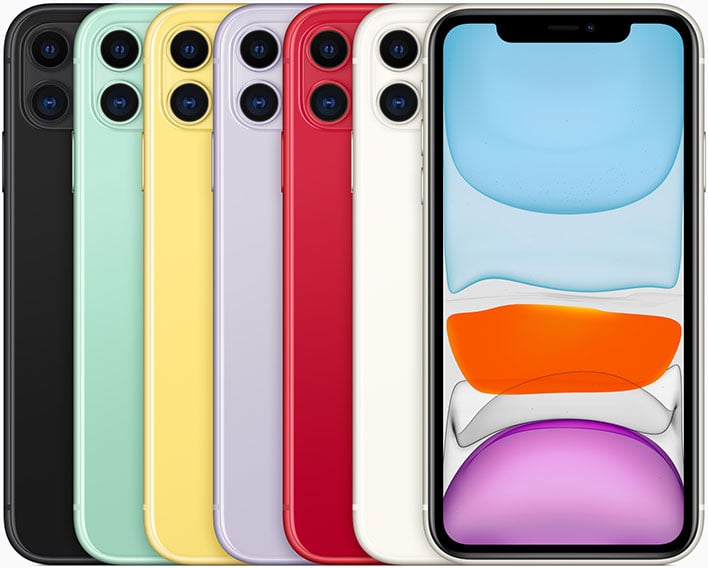 Is your iPhone 11's display acting up? Specifically, is it not registering taps and swipes like it is supposed to? Though we here at HotHardware haven't noticed the issue internally since the iPhone 11 launched in 2019, you are not alone, apparently. Apple has announced a free iPhone 11 display replacement program to solve a problem affecting a "small percentage" of displays that, because of whatever the defect is, causes it to stop responding to touches.
According to Apple, affected devices were manufactured between November 2019 and May 2020. Additionally, it seems only the standard iPhone 11 is affected, and not the iPhone 11 Pro or iPhone 11 Pro Max. The issue has to do with the display module inside the iPhone 11, which is what makes the magic of touch input happen.
To see if you handset is among those affected, Apple set up a special iPhone 11 support page where you can enter in your phone's serial number. You can find the serial number on your phone's retail packaging, on the SIM tray, or by going to Settings > General and tapping About. Of course, the latter option could be problematic if your phone completely ignores taps.
Should your handset be affected, you have three options for getting it fixed: go to an Apple authorized service provider, make an appointment at an Apple Retail Store, or contact Apple Support to arrange mail-in service through the Apple Repair Center.
As always with any kind of hardware repairs, it is highly advised that you back up your data beforehand, which is another ting that is hard to do if your phone is being finicky with touch inputs. That said, even if your phone is not exhibiting symptoms, if it is a potentially affected model, you might want to take advantage of the free repair anyway—you're covered for two years after the first retail sale of the unit.

Finally, if you previously paid to have this specific issue fixed, you can contact Apple about a refund.