The latest generation MacBook Pro and MacBook Air represent a major departure from past models—they are the first ones to incorporate Apple's own custom M1 silicon, in place of the Intel x86 CPUs the company had been sourcing for the past 15 years. It is the beginning of a new era. You would not know it at first glance, though, because these new systems look the same, even if you tear into them.

Of course, we all know that looks can be deceiving. Despite how these new laptops might appear from a passing glance, these are very different machines than their predecessors. Apple is embarking on a two-year transition to completely move away from Intel CPUs, and design custom processors based on Arm, similar to its iPad and iPhone handsets.
Thanks to the folks at iFixIt, who got their hands on the new systems and promptly tore them down, we get our first real look at an M1 system-on-chip in the wild. Same goes for the guts of these latest laptops.

"While Apple touts its M1-powered Macs as nothing short of a revolution, internally, they could hardly be any more similar to their predecessors. The new 13-inch MacBook Pro looks so familiar inside, we had to double-check that we didn’t accidentally purchase the old model. Meanwhile, the new MacBook Air’s biggest move was to … eliminate the fan. Amazing, right? Well, in many ways, yes," they said.
The previous generation MacBook Air had a fan that sat in the upper left corner. Looking at the image above, however, you can see it has been replaced by an aluminum heatspreader. The rest looks mostly the same.
Some may scoff at a fanless design, but it has worked for the iPad and iPhone, and early reviews seem to suggest it is acceptable here as well. The added bonus is users do not have to worry about dust buildup in the fan blades, because there aren't any. 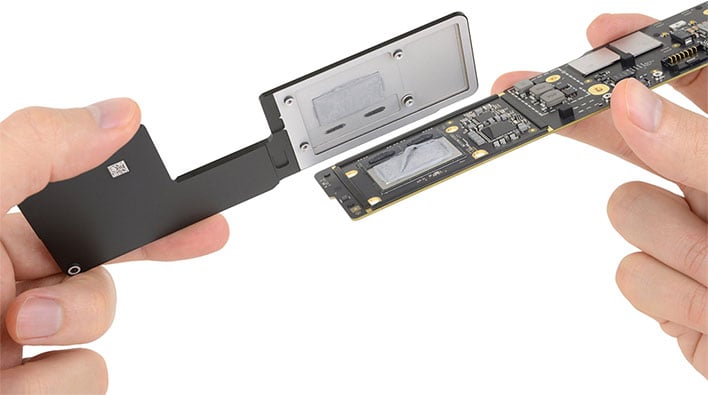 The spunky M1 chip sits underneath a thick cold plate that draws heat away through the wonders of conduction, transferring toasty thermals to a flatter and cooler end. According to the teardown analysis, "this solution may take longer to cool off, and may cap out sooner, but by foregoing heatpipes or a vapor chamber, the sink also has more mass to saturate with thermal energy."
This solution also lacks moving parts that could break down over time. However, if plan to use the MacBook Air for years to come, there might be a point where you would want to open it up and apply a fresh batch of thermal paste, but that remains to be seen.
As for the MacBook Pro, even though it runs extremely quiet even under heavy load, it still relies on a fan to push air around. And not just any fan, but the exact same one that is in the previous model with an Intel processor inside. It's quieter because the M1 never warrants having it spin up as fast.

Here is a look at the M1 chip, cleaned off and posing for the camera. The M1 chip is built on a 5-nanometer manufacturing process and packs 16 billion transistors. It has an 8-core CPU and, in this case, an 8-core GPU with 128 execution units as well, along with a 16-core neural engine.

Those two rectangular chips that are nestled up against it on the right side are memory components. Each one is a 4GB SK Hynix LPDDR4X memory chip, for a total of 8GB of RAM. It's a smart design—as the teardown gurus note, "by baking RAM into the M1 package, each part of M1 (CPU, GPU, Neural Engine, etc) can access the same memory pool without having to copy or cache the data in more than one place." 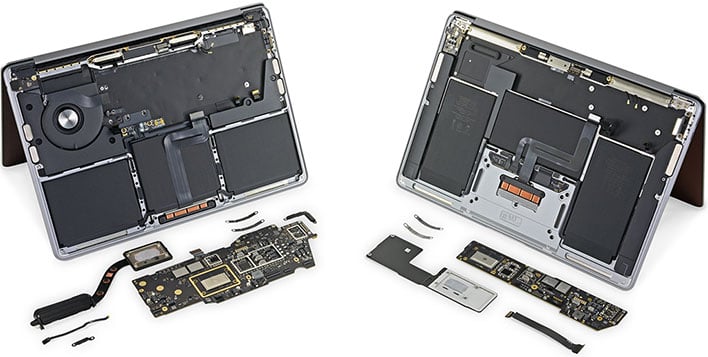 It's also a frustrating design for do-it-yourself types, because it means the memory can never be replaced or upgraded. Apple is not keen on making DIY repairs and upgrades easy, so this is not a surprising design decision, beyond just the potential performance benefits.
There is no teardown score on this one, because this was more of a tour than an official evaluation. For reference, however, the 2018 MacBook Air teardown earned it a 3 out 10 Repairability score, while the 2019 MacBook Pro teardown yielded a 1 out of 10 score.