Now that Apple has broken up with Intel as part of a two-year transition plan to move away from x86 Core processor in favor of ts own Arm-based silicon, its former partner is free to speak its mind, and boy does Intel have some things to say. Intel did not hold back at Computex 2021, saying systems based on its CPUs deliver a "better gaming experience than 100 percent of Mac laptops," among other things.
Several pages of an all-encompassing Computex slide deck are devoted to touting the benefits of Intel's processors for gaming, while Apple systems, including ones based on its fancy new M1 silicon, are ill suited for the task. It even enlisted actor Justin Long, who played the "Mac" in those old "Mac vs PC" commercials, to assist in the effort. All is fare in love and war, right?

Valheim on a Mac? No-go...
The presentation begins with a slide featuring Mr. Long, titled "Get real, go PC." It then lists several benefits of buying into the PC ecosystem (with PC referring to x86 systems in this context), like a wide range of form factors to choose from, support for multiple 4K displays and touchscreens, a catalog of hundreds of games (that should really say thousands), and other reasons to invest in a PC.
On the flip side, Intel points to several reasons buyers should think twice about buying an M1-based system. Such as Apple's penchant for not including key devices and gear for a full experience, the lack of touchscreen support, and a limited games library, to name a few.
Intel also addressed the topic of emulation, which can open up support for more games on M1-based systems. To that end, it showed a demo of a MacBook Pro running Valheim in not-so-great fashion, through a virtual machine via Parallels.
Outside of emulation, Intel contends over half of today's games are not supported on macOS—titles like Apex Legends, Call of Duty Modern Warfare, Cyberpunk 2077, Grand Theft Auto V, Hitman 3, Monster Hunter, PUGB, Warframe, and others. 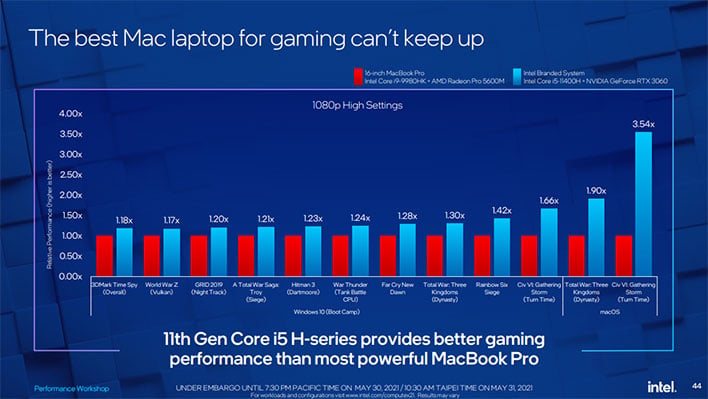 What of the games that can be run on a Mac, either through virtualization or natively in macOS? Interestingly, Intel pointed to the performance disparity between a 16-inch MacBook Pro outfitted with a Core i9-9980HK processor and AMD Radeon Pro 5600M GPU, and an Intel-branded system with a Core i5-11400H processor an NVIDIA GeForce RTX 3060.
It is a bit of an odd attempted knock at Apple in this specific instance, because it is a partial comparison of Intel's own silicon from two different generations. The point Intel is trying to make, however, is that gamers are limited in choice on macOS, and what's available in the Apple camp will not perform as well as what's available on the other side.
Does this kind of comparison really matter, though? From Intel's vantage point (well, from its marketing vantage point, anyway), "everyone is a gamer." That's what one of slide deck claims, while pointing out that there are over 1.5 billion PC gamers and over 300 million creators. Hyperbole, sure, but gaming is a huge market.

It wasn't just Apple that Intel dumped on in its presentation. It also took shots at Qualcomm and AMD, with cherry-picked performance comparisons that shine a bright light on Intel's hardware. For example, there's a slide showing a massive performance advantage in Handbrake when using an Intel Core i7-1195G7-based system versus an AMD Ryzen 7 5800U system, and another slide pointing to much better performance on a Surface Pro 7 with a Core i5 1135G7 versus a Surface Pro X with a Microsoft SQ2 SoC.
They are valid points, even if narrow in scope (there are instances Apple, AMD, and Qualcomm could point to where their silicon outperforms Intel's in some fashion). But at the same time, it feels like Intel is giving the competition too much air time. That's how the game is played, we suppose, and Intel clearly wants to remind everyone that it still has a strong product lineup.