Earlier this week, Apple dropped a bombshell on the computing world with its new M1 SoC, which is the first in a [likely] long line of custom, in-house Arm chips that will power the company's Macs. The M1 in its current form(s) is available in the MacBook Air, 13-inch MacBook Pro, and the Mac mini.

When announcing the M1, Apple confirmed that the M1 features an 8-core processor, which consists of 4 high-performance cores and 4 efficiency cores. Apple also explained that there was [up to] an 8-core GPU onboard capable of delivering 2.6 TFLOPs compute for graphics-intensive content creation apps and games. Despite this, Apple didn't really provide us with any concrete performance numbers on how the GPU in the M1 stacks up to the competition, and only gave vague comparisons like “3x faster” than then competition without any real frame of reference. 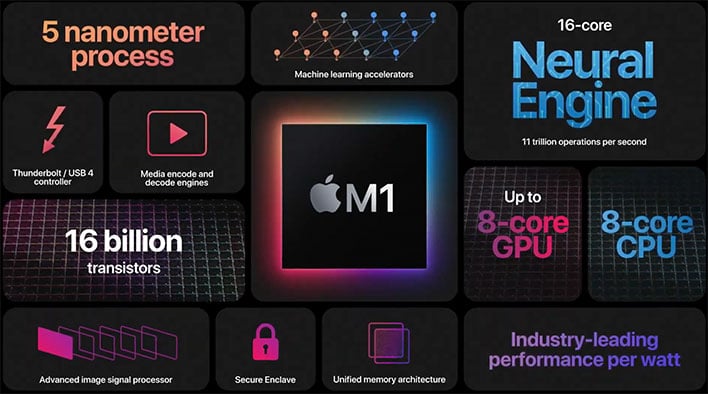 However, we're now seeing the first benchmarks for an Apple M1-equipped machine making their way to GFXBench 5.0. Interestingly, the M1's GPU is paired up against an NVIDIA GeForce GTX 1050 Ti -- both systems were running macOS using Apple’s Metal graphics API. Given that Apple has only used AMD for discrete graphics in Mac in recent years, we're going to assume that the GeForce GTX 1050 Ti is being used in an external enclosure hooked up to a free Thunderbolt 3 port.

With that being said, the M1 is shown to be a worthy competitor for the GeForce GTX 1050 Ti, with the off-screen numbers coming in at 22 percent higher for the Aztec Ruin Normal Tier and around 21 percent higher in Aztec Ruins High Tier (off-screen). It was a similar ~20 percent delta in favor of the M1's GPU in Car Chase and Manhattan 3.1. 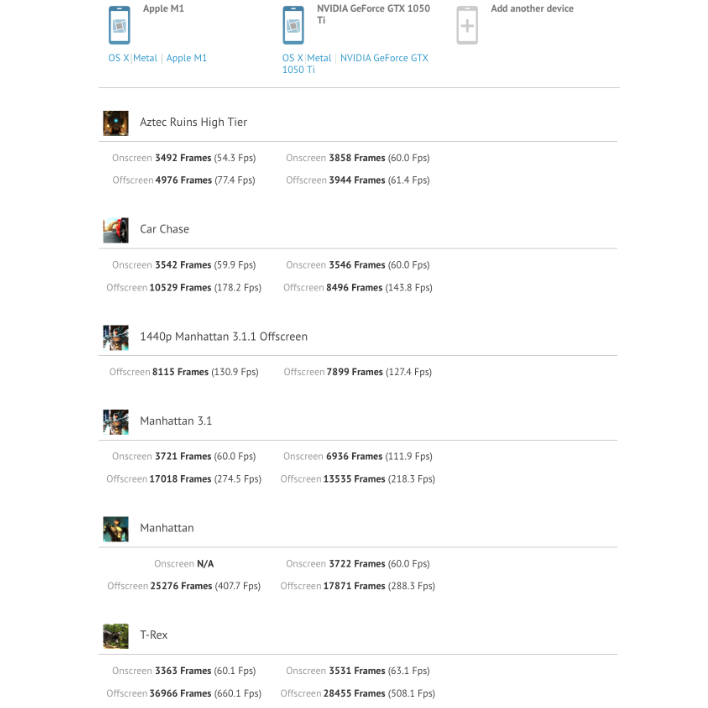 Where things really started picking up for the M1's GPU was with the standard Manhattan benchmark and T-Rex, where it was roughly 30 percent and 25 percent faster respectively than the GeForce GTX 1050 Ti.

We should note that these are just preliminary number based on early Apple Silicon Macs that are floating around (likely in the hands of reviewers ahead of next week's official launch). But from what we can see so far, the M1's GPU looks like a formidable challenger to IGPs found in even the most recent processors like AMD's Ryzen 4000 APUs (Radeon Vega 8) and Intel's Tiger Lake CPUs (Iris Xe). And these numbers absolutely demolish the 10th and 11th gen Intel IGPs found in previous versions of the MacBook Air, MacBook Pro, and Mac mini.

From what we can see, Apple is off to a strong start with M1, and we can't wait to get one in our lab to see how it fares in a more extensive number of benchmark tests. And we definitely are eager to see even more potent Mx SoCs in the future that would be potent enough to be used in devices like the 16-inch MacBook Pro, iMac, iMac Pro, and Mac Pro.