Apple kicked off its WWDC 2022 event today with a prolonged preview of iOS 16, which promises the "biggest update ever to the Lock Screen" and a bevy of other changes. Some of the updates are rather minor, like editing the font on the Lock Screen text. But others are more impactful, such as being able to edit an iMessage after it's been send, or even unsend it altogether. Let's dive in.
Starting with the Lock Screen changes, Apple is aiming to give iPhone users a more personalized experience. It starts with being able to change the look of the date and time with "expressive type styles and color choices," which while cool and all, is not as exciting as some of the other customization controls it delivers.
One of them is Live Activities. This is a new feature that puts a persistent notification on the Lock Screen to deliver updates in real time. You could track a basketball game or a workout, or even a food delivery without unlocking your iPhone each time.
Apple also redesigned the Lock Screen notifcations so that they roll up from the bottom rather than being splattered right in the middle of your phone's background image. It's a subtle but welcome change. 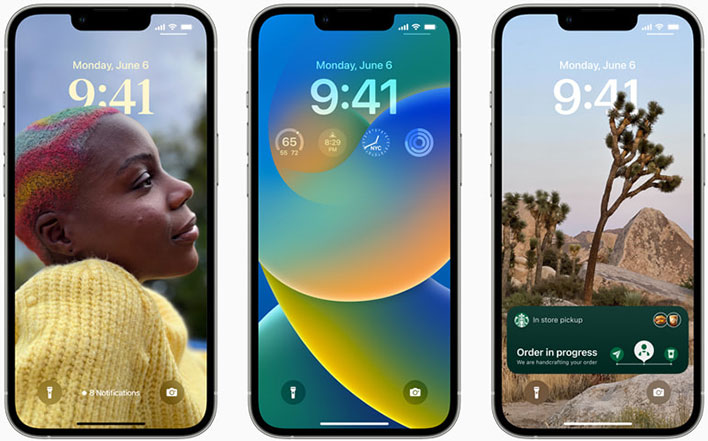 Related to all this is something Apple is calling Focus. This essentially allows users to set up multiple Lock Screens that behave differently. Setting one up for work, for example, might show calendar events that are coming up.
"With Focus filters, apps like Calendar, Mail, Messages, and Safari can display only the content that is relevant to a user’s Focus, helping them to find better balance," Apple explains.
A feature I'm more personally looking forward to with iOS 16 is being able to edit or recall recently sent messages. This is potentially a big deal on multiple levels. It's frustrating to send a typo, especially if iOS autocorrected a word to something you didn't want (really ducking annoying, sometimes). But who hasn't sent a text message and instantly regretted it?
Users will have 15 minutes to edit or unsend a text. Additionally, you'll be able to recover recently deleted messages for up to 30 days after nuking them. Cool stuff.
There were a few other iOS 16 updates previewed during the event, such as a shared iCloud library for your photos (share it with up to six users), new tools for emails, on-device dictation that allows users to movie fluidly between voice and touch/keyboard, and a few other tidbits.
Apple is previewing iOS 16 to developers now, with a public beta scheduled for next month before releasing in polished form for iPhone 8 and later devices this fall.