Apple efforts to design its own 5G modem hardware in-house "may have failed," setting the stage for Qualcomm to be the sole supplier of 5G chips for next-generation iPhone models that will ship in the second half of next year, according to Apple analyst Ming-Chi Kuo. If that's the case, Qualcomm's future earnings could see a big spike.
Mr. Kuo is probably the most plugged-in Apple analyst around. He often predicts supply chain developments with a relatively high degree of accuracy. That's not to say Apple has definitely run into a snag in developing its own 5G modems, but this is a far more credible source than a random rumor on the internet. 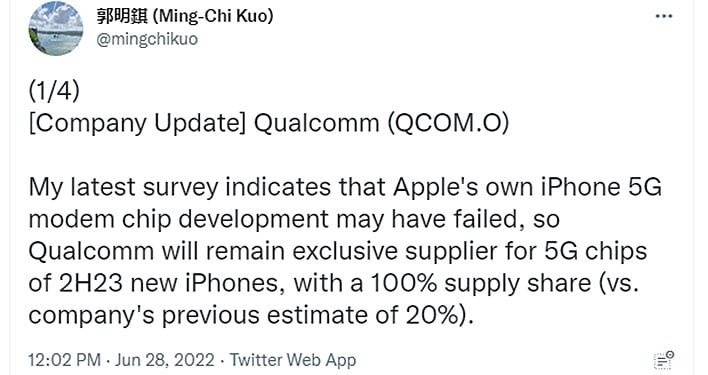 "My latest survey indicates that Apple's own iPhone 5G modem chip development may have failed, so Qualcomm will remain exclusive supplier for 5G chips of 2H23 new iPhones, with a 100% supply share (vs. company's previous estimate of 20%)," Kuo stated in a Twitter post.
He went on to say that Qualcomm's revenue in the second half of 2023 and the first half of 2024 will probably beat market expectations "as Apple fails to replace" the company's 5G chips with its own hardware.
"I believe Apple will continue to develop its own 5G chips, but by the time Apple succeeds and can replace Qualcomm, Qualcomm's other new businesses should have grown enough to significantly offset the negative impacts caused by the order loss of iPhone 5G chips," Kuo stated in a follow-up tweet.
Qualcomm told investors last year that it anticipated its share of 5G modems for iPhone devices in 2023 would drop to 20%, and that the company would still be in good shape. But if Kuo's data is accurate, Qualcomm could be in for a major uptick in revenue, at least through the next year and half. Current iPhone models employ Qualcomm's Snapdragon X60 hardware, and it's likely that next-gen models will feature its newer and speedy 10Gbps Snapdragon X65 modem, if the analysis is accurate.

Beyond that it's anyone's guess at the moment. It's no secret that Apple prefers to design as much hardware as it can in-house. Not just for iPhones, but all devices—that's why it ditched Intel in its laptops and desktops, trading x86 Core processors for its own M1 and, more recently, M2 hardware.
As for its 5G modem efforts, this began in earnest when Apple purchased much of Intel's modem business for $1 billion in the fourth quarter of 2019. That deal included 2,220 employees and critical IP.