Android 13 rolled out to Google's Pixel phones a couple of months ago, and that's been the only place to get the latest version until now. Following a brief beta test, Samsung has started deploying One UI 5, based on Android 13, for the Galaxy S22 family, but there's one big catch. The version of the phones available in the US aren't part of the initial release. It's only for S22 phones running Samsung's Exynos processors.

Android 13 doesn't have the sweeping changes that were common just a few years ago. It's an evolution over Android 12, which introduced Google's Material You themes. Android 13 expands on Material You, adding support for third-party apps to plug into the themes. There are also a raft of security and privacy enhancements.

Samsung always puts its own spin on Android in the form of its One UI software layer. From the beta test, we know Samsung has deeper integrations with Material You, along with more color options. You also have more freedom in which widgets can appear in Samsung's stackable "smart widgets." 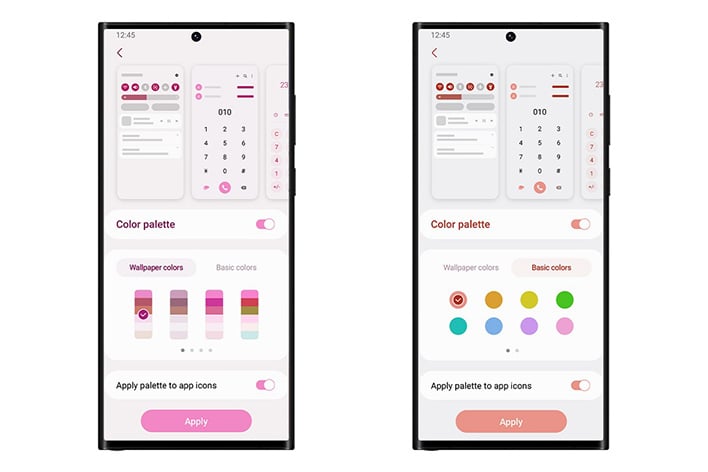 For those in European countries, the OTA will arrive with version number S90xBXXU2BVJA. It's available in Austria, Croatia, France, Germany, Ireland, Italy, Poland, Portugal, Serbia, Slovenia, Switzerland, the Czech Republic, and the UK. Android 13 for the S22 is also rolling out in Samsung's home market of South Korea with version number S90xNKSU2BVJA. We're still early, so the update could arrive in other European and Asian countries soon.

As with most Galaxy S phones in the past, Samsung used Exynos chips for the S22 in most international markets. The US and Canada get a version of the phone with Qualcomm Snapdragon chips instead. Lately, this is considered the superior version of the phone, so much so that fans have started petitions to get Samsung to use Snapdragon globally. Samsung recently forged a deal with Qualcomm to use its chips in more flagship phones. So, they may get their wish. For those with supported devices, head to the settings and check for updates to grab the OTA.