Google is currently beta testing a nifty new facial expression feature in Android, that will allow uses to perform certain actions by doing things like smiling, raising their eyebrows, opening their mouth, and so forth. The feature is being added to Google's Android Accessibility Suite, which is a collection of apps that make Android easier to manage for people with disabilities.
This particular feature has been dubbed "Camera Switch" and, assuming all goes to plan, it will release to the public with version 12 of the Android Accessibility Suite. The beta test coincides with the fourth beta drop for Android 12, the next major version of Google's popular mobile operating system for handsets and tablets.
"Camera Switches use the front camera to see if you're looking at the screen and to recognize facial gestures," Google's description reads. "Images aren't stored or sent to Google. When enabled, this feature uses additional battery. Keep device plugged in and charging if possible." 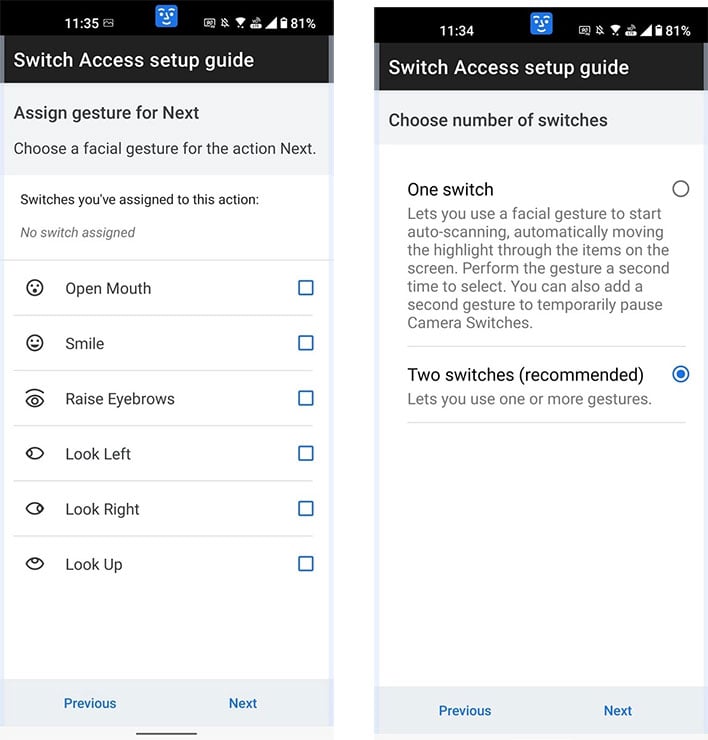 The folks at XDA-Developers shared a handful of screenshots and impressions of the new feature. Some of the gestures supported include...
There's also a toggle for "Enhanced visual feedback," a potentially useful supplementary feature that will show a visual indication of how long a person holds a gesture.
The way it's constructed now, users can turn on either one switch, or multiple switches, the latter of which enables the use of multiple gestures (and is the recommended option). Google also uses to fine tune the gesture recognition, such as using a slider to adjust "how big you want to make the gesture before it's recognized."
This is a great feature addition that could help a lot of people. There are only a few gestures being tested at the moment, but we could certainly see Google adding more in the future, if the demand is there. Good stuff for sure.