This should come as a surprise to absolutely no one who has been paying attention to the tech sector, but AMD is coming off a record quarter of earnings, which contributed to record fiscal year results. AMD capped off 2020 with $3.24 billion in revenue during the fourth quarter, up 16 percent sequentially and 53 percent year-over-year, and raked in $9.76 billion for the full year.
That amounts to a staggering 45 percent jump in year-over-year revenue. After paying the bills, AMD was left with a $4.35 billion profit for all of 2020, up 52 percent from the previous year. The company has come a very long way from the days when it used to post quarterly and annual losses with alarming frequency.
"We significantly accelerated our business in 2020, delivering record annual revenue while expanding gross margin and more than doubling net income from 2019," said Dr. Lisa Su, AMD president and CEO. "Our 2021 financial outlook highlights the strength of our product portfolio and robust demand for high-performance computing across the PC, gaming and data center markets." 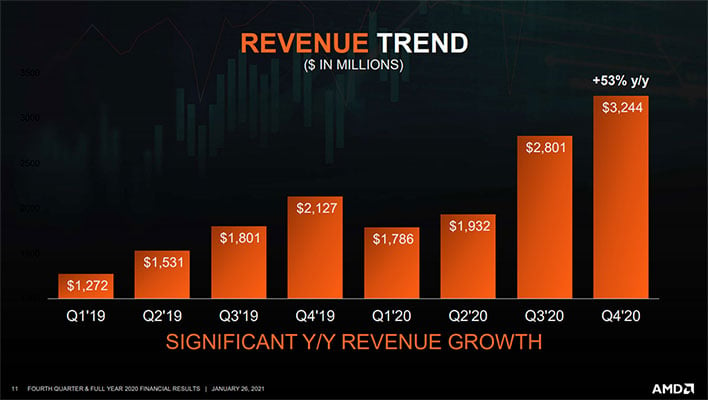 Strong CPU and GPU sales during a pandemic bolstered AMD's bottom line, as the global workforce trended towards telecommuting. The same goes for education, both of which contributed to increased PC shipments last year.

AMD's biggest gains came from its Enterprise, Embedded, and Semi-Custom division, which saw a significant 65 percent year-over-year rise to $2.02 billion for the full year, and $1,28 billion for the fourth quarter. This is the segment that includes AMD's EPYC server CPUs for the datacenter, as well as processors and graphics chips for game consoles, like the Xbox One and PlayStation 4 (and the Xbox Series X/S and PlayStation 5 going forward). The company also highlighted significant traction with major data center cloud services providers Microsoft Azure and Amazon's AWS division, the latter of which announced cloud compute offerings with both EPYC CPUs and Radeon Pro GPUs, while Azure announced new AMD EPYC-powered virtual machine offerings.
Nevertheless, it was the company's client sales that performed the best overall. Net revenue from its Computing and Graphics division totaled $6.43 billion for the year, up 37 percent from 2019. Fourth quarter sales contributed $1.96 billion to that tally.
Looking ahead, AMD will attempt to keep the momentum going with its Zen 3 CPUs and RDNA 2 GPUs. Zen 3-based AMD Ryzen processors only recently launched to consumer desktops, and have been in short supply, but things should ease in the coming weeks and months. AMD will also be releasing Zen 3-based EPYC processors to the enterprise market relatively soon. In addition, demand for the Xbox Series X/S and PS5 should keep company's tills relatively full as well. AMD is, what you might call, "firing on all cylinders."