AMD is fleshing out its current-generation Radeon Pro lineup with RDNA 2 underneath the hood with the introduction of the Radeon Pro W6400. It slides into the lineup beneath the existing Radeon Pro W6600 for medium to high-level workloads, and the Radeon Pro W6800 designed for high to extreme workstation workloads. So what does that mean for the Radeon Pro W6400?
A more affordable path into RDNA 2 territory for workstation builds, for one. It also ranks as AMD's first workstation graphics card to feature a GPU built on a 6-nanometer manufacturing process. This is still the same underlying architecture, so you can consider the shift from 7nm to 6nm as more of a tune-up. Same goes for the just-launched Radeon RX 6500 XT we reviewed today. 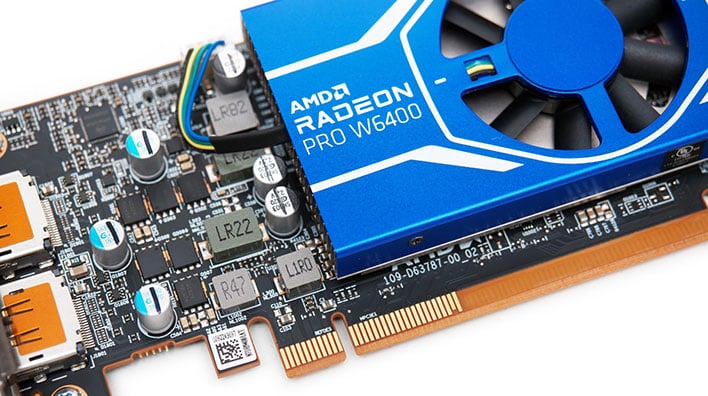 AMD is shipping the Radeon Pro W6400 in a half-height, single-slot form factor measuring 6.6 inches (168mm) long. The GPU packs 5.4 billion transistors and wields 12 compute units, 768 stream processors, and 12 Ray accelerators. According to AMD, it pumps out 3.54 TFLOPs of single-precision (FP32) throughput and 7.07 TFLOPs of half-precision (FP16) throughput.
The card also features 4GB of GDDR6 memory running at 16Gbps, linked to a 64-bit memory interface for 128GB of memory bandwidth. L3 Infinity Cache checks in at 16MB.
Similar to the Radeon RX 6500 XT and RX 6400 (both consumer cards), the Radeon Pro W6400 leverages PCIe 4.0 x4 rather than x8 or x16. That shouldn't be an issue, though, as there's little chance it is going to be bandwidth-starved. To that point, AMD claims its latest Pro model beats out NVIDIA's T600 in a variety of workloads. Here are a couple of benchmark charts the company shared... 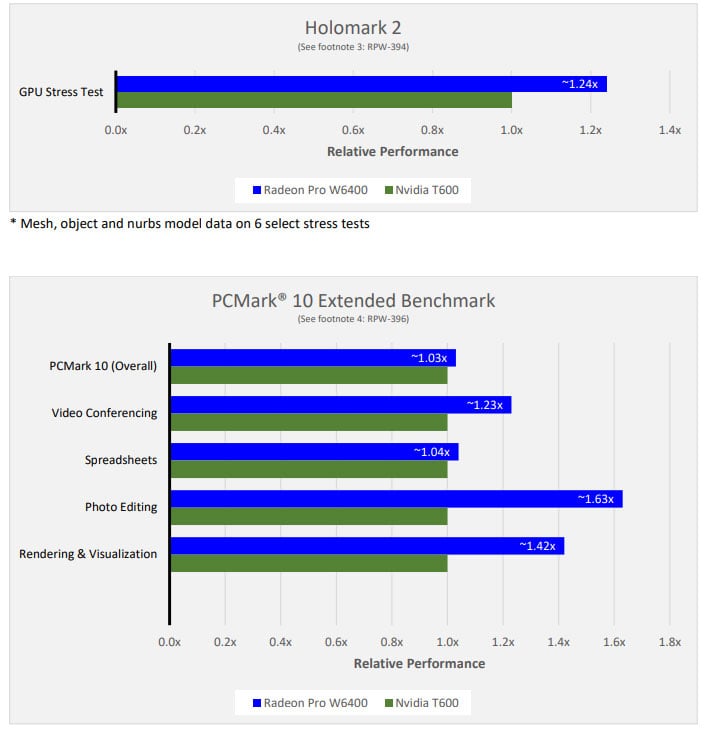 We can't speak to AMD's results from its internal testing, at least not quite yet. However, we will have a review of the Radeon Pro W6400 very soon (possibly later today or by tomorrow at the latest) with our own collection of benches and accompanying analysis, so stay tuned for that.
As for AMD's testing, it was performed on a machine configured with an Intel XeonW-2125 processor, 32GB of RAM, and Windows 10 Pro with a pre-production sample of the Radeon Pro W6400. The data is over a month old, so it's possible that updated drivers and finalized hardware could boost performance further. We'll see.