AMD is fleshing out its Navi family of GPUs with two new entries in the desktop and mobile workstation segments. According to the company, it is targeting Design & Manufacturing, and Architecture, Engineering & Construction (AEC) professionals with this new lineup.

AMD is indicating that in the case of the Radeon Pro W5500, it offers a 25 percent uplift in performance-per-clock compared to its GCN-based Radeon Pro predecessors. The company is also touting up to 32 percent lower power consumption figures versus the competition from NVIDIA. If that wasn't enough, it's also being claimed that the Radeon Pro W5500 delivers a 10x improvement in application workstation performance compared to its NVIDIA rivals in SPECviewperf 13 multitasking loads. However, that's just one cherry-picked benchmark, so we'll be eager to see what the complete picture is once we are able to test these new GPUs in-house.

Since these are Navi-based cards, they are both built on AMD's current 7nm process tech. The Radeon Pro W5500 uses the PCIe 4.0 interface bringing 22 compute units to the table along with 1408 stream processors. It promises FP32 compute performance of 5.35 TFLOPs, and offers up to 8GB GDDR6 memory. 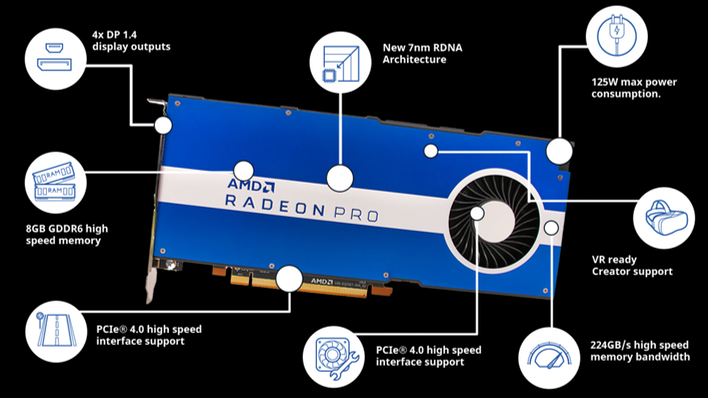