Dell is not giving up on the idea of an external graphics enclosure providing laptops with a major GPU performance boost, and frankly we're thrilled with the decision. Following up on its Alienware Graphics Amplifier released in 2014 (and which I tested in 2016 as part of our Alienware 13 R2 review), Dell has announced an evolution of that design called Concept Polaris, which brings some key upgrades over the AMP.

I can't speak for everyone at Hot Hardware, but I've always appreciated the idea of an eGPU box, despite it being a relatively niche product category with a few downsides. Depending on the individual, a lightweight productivity laptop might make more sense for work and travel, but not for gaming. That's where an eGPU box comes into play, potentially adding significant GPU firepower to a workhorse notebook. Or even to a gaming laptop with a lower end GPU. 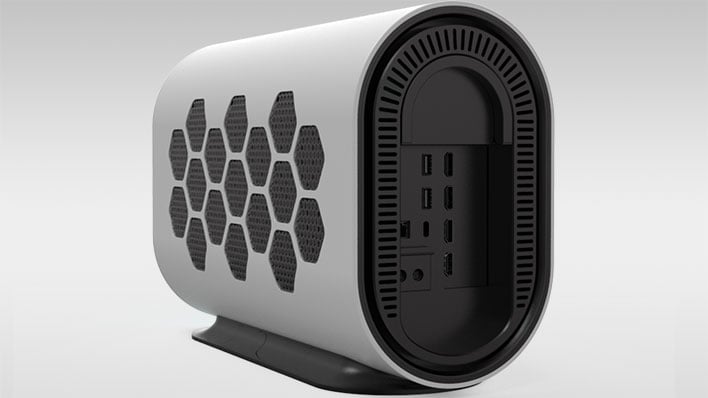 The AMP was Dell's foray into the category, and while a neat product, the proprietary connection limited its utility—it was only designed to work with a handful of other Alienware products. That's not the case with Concept Polaris. It connects via USB4, Thunderbolt 4, and Thunderbolt 3 so that it can work with a broad range of laptops. The front and back are also home to a range of ports, including USB Type-C, USB Type-A, and 2.5G LAN for added functionality. 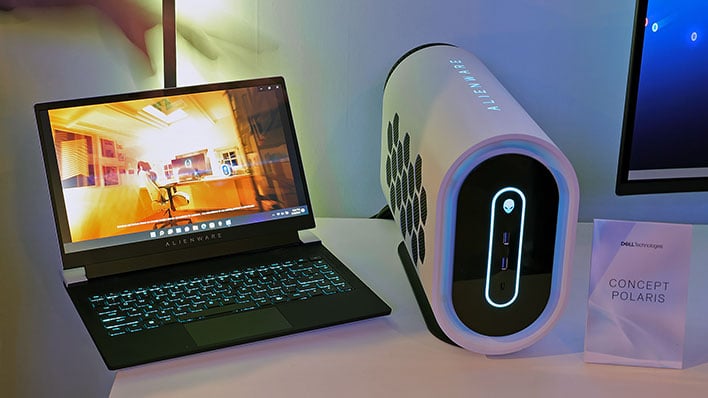 As you might imagine, a futuristic design within the Alienware mold is at play. Concept Polaris adopts Dell's Alienware Legend ID 2.0 design language with a cylindrical shape and rounded edges, honeycomb ventilation, LED lighting, and what Dell says is "meaningful cable management." It can sit horizontally as shown in the picture above, or stand vertically to take up less desk space if a smaller footprint is needed.
Dell retooled the inside as well. Concept Polaris ditches the built-in power supply unit that was part of AMP and instead draws power from a pair of AC adapters. Being that this is a concept design, Dell is playing around with a couple different versions—one with two 33W AC adapters and a more powerful variant that utilizes two 425W AC adapters. 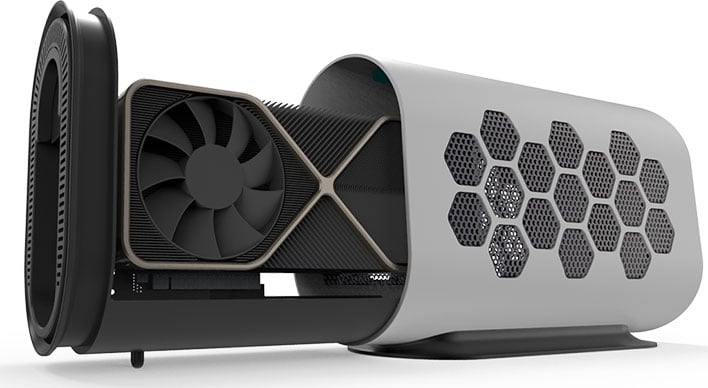 While the design is different, the idea is the same—slap a desktop graphics card into the enclosure, plug it into a laptop, and enjoy burlier graphics. There's always some performance loss when going this route versus plugging a desktop graphics card into a PCI Express slot in a tower PC, but there are still massive gains to be had over onboard graphics and some weaker discrete mobile GPU options.
Dell has not specified the exact dimensions of Concept Polaris in its current prototype form, but did say it can fit a full-size 16-inch graphics card. The cherry on top? This is a liquid-cooled solution utilizing Dell's 240mm Cryo-Tech cooling solution and its exclusive Element 32 thermal interface material (TIM). According to Dell, the liquid cooling setup is sufficient to enable overclocking the GPU through its Alienware Command Center utility.
Whether this concept becomes a shipping product still remains to be seen, as is typically the case with prototypes trotted out a CES. It seems like there is a reasonable chance, though, as Dell has put a lot of thought into the design.

"When designing this concept, we first defined who we were building this for: the core Alienware customer. A performance-driven enthusiast. We also saw a lot of cross functionality for gaming creators that would benefit from desktop level graphics in their mobile gaming solutions. And finally, we were conscious of where and how people are gaming now, knowing that working from home has transformed the real estate of the battle station set up," Dell explains.
Dell also notes that features, design elements, and even the purpose of Concept Polaris could change over time and be redefined. The company wants to hear your thoughts about the product though, so if you have any, feel free to share them in the comments!