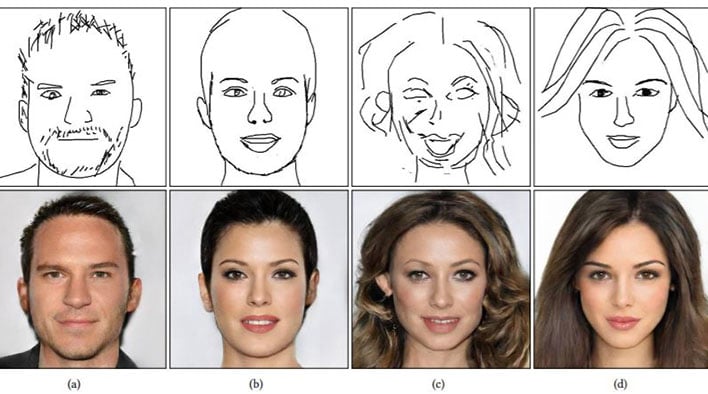 Artificial Intelligence (AI) has many different uses, including facial recognition and the creation of photo-realistic human faces. However, these various AI applications have not always hit the mark. They often create very basic or unnerving images that fail to bridge the "uncanny valley" gap. A team at the Chinese Academy of Sciences in Beijing and City University of Hong Kong have created one of the most advanced image generators to date. DeepFaceDrawing relies on artificial intelligence to transform sketches of human faces into high-quality images.
Similar AI frameworks require detailed, well-drawn sketches. DeepFaceDrawing is intended to help those with very little drawing experience. According to the team, “our key idea is to implicitly learn a space of plausible face sketches from real face sketch images and find the closest point in this space to approximate an input sketch.”
The team’s deep learning framework uses modules to generate the images- CE (Component Embedding), FM (Feature Mapping), and IS (Image Synthesis). The CE module essentially identifies some of the most prominent facial features such as the eyes, nose, mouth, and the “remainder” of the subject’s face. The FM and IS modules then together “map component feature vectors to realistic images.”

This framework creates some incredibly realistic images of human faces. However, there are still a few kinks to work out. For example, the sketch of one woman featured two different sized eyes. The AI in turn produced an image where the woman essentially had two different eyes. It is unclear whether this woman’s eyes are indeed different sizes in real life or if their asymmetry was due to the artist’s lack of skill. DeepFaceDrawing also seems to primarily produce images that feature Caucasian or Latin American subjects. It was also interesting to see that most of the subjects were young or middle-aged adults.

This technology could potentially have many uses. The team noted that their framework would be particularly useful in “criminal investigation, character design, educational training, etc.” DeepFaceDrawing will be presented at the upcoming SIGGRAPH conference in July. The team also noted that their code is “coming soon”, but has not yet provided a timeline.