The human brain is enormously complex, and cracking the code of its intricacies in its entirety might never be accomplished. However, there have been loads of interesting research related to brain activity. Most recently, a team of researchers say they developed a deep learning framework that is able to decode sensory and behavioral variables from wide-band neural data. Or put another way, they came up with an AI scheme that can interpret brain signals and predict behaviors. Whoa.
Interpreting brain data is no easy task, and often depends on manual operations, the researchers say. The landscape is rife with incomplete datasets. The task is further compounded by the fact that activity in any particular region of the brain can represent multiple variables, and to differing extents.
"Taking the entorhinal cortex for example, a typical electrophysiological recording might contain spike trains from distinct cells predominantly encoding head direction, self-location, and movement speed via their firing rates, while other neurons have more complex composite representations. At the same time, information about speed and location can also be identified from the local field potential (LFP) and the relative timing of action potentials," the researchers explain.
The immense challenge is what led the researchers to focus their efforts on training artificial neural networks (ANNs), which "regularly exceed human-level performance on tasks" where high dimensional data gets mapped to lower dimensional labels. Which is a fancy way of saying computers and AI schemes are faster and more precise than us mere mortals. 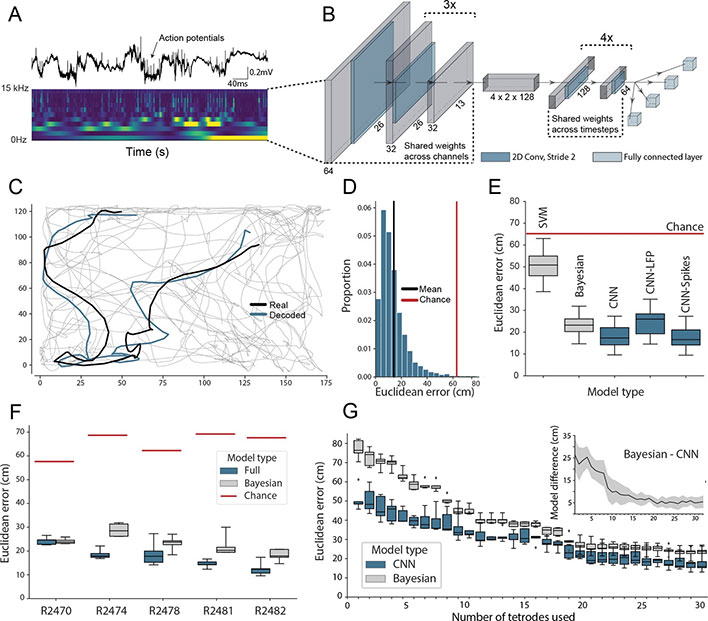 So they built a convolutional neural network called DeepInsight and tested it on rodents. Remarkably, the network "accurately decoded the animals' location, speed, and head direction," meaning it was able to predict those movements based on brain data analysis.
"These results together show that our model can be used on a wide variety of continuous regression problems in both rodents and humans and across a wide range of recording systems, including calcium imaging and electrocorticography datasets," the researchers explain.
There's a bigger goal than predicting where or how fast a rat might be scurry around in a maze. The larger implication is having a better understanding and perhaps curing diseases like Alzheimer's, or least coming up with more effective treatments.
It's an interesting study co-led by the Kavli Institute for Systems Neurosicence in Trondheim and the Max Planck Institute for Human Cognitive and Brain Sciences Leipzig. The researchers published the brain decoding study eLife, where you can read about all the technical details and methods used.