A 10-Second Video Clip Viewable For Free Fetches $6.6M At Auction Because #Blockchain

It was a good day for a collector of digital art, who managed to score an insanely rich payday for what amounts to a short 10-second multimedia clip. The digital clip sold for $6.6 million at auction. That works out to $660,000 per second of video and audio, and here is the kicker—the clip is available to anyone with internet access to view for free. So why did it command so much? In a word, blockchain.
The video is the creation of digital artist Mike Winkelmann, otherwise known as "Beeple" online. This particular pieced, titled "Crossroads," appears to show former President Donald Trump keeled over with various disparaging remarks tattooed or written on his unclothed boby. It sold as an NFT, or non-fungible token. That basically means it employs blockchain technology to apply a digital signature to the piece, verifying it as the original artwork and not a digital copy.
Think of it like this—you could scan physical art on paper and have an exact duplicate in appearance. However, only the original holds value (usually, anyway). Likewise, employing blockchain technology is a way for artists and collectors to authenticate works of art in the digital realm, making the originals unique and valuable. In this case, unique and valuable to the tune of $6.6 million.

"Crossroads" sold at Nifty Gateway, an online marketplace for this sort of thing, which proclaimed on Twitter, "History has just been made."
"We can confirm this is a legitimate sale - this was brokered by Nifty Gateway's art buying services. We have been in directly contact with buyer and have confirmed their identity. They are choosing to remain anonymous at this time," Nifty Gateway wrote.
There is a whole world of digital art out there, and some of it is raking in major money. Beeple's work is especially doing extremely well. In addition to making "Crossroads," which netted millions of dollars for the previous owner, Beeple has a piece up for auction on Christie's that is currently at $3 million, with 10 days left to go. 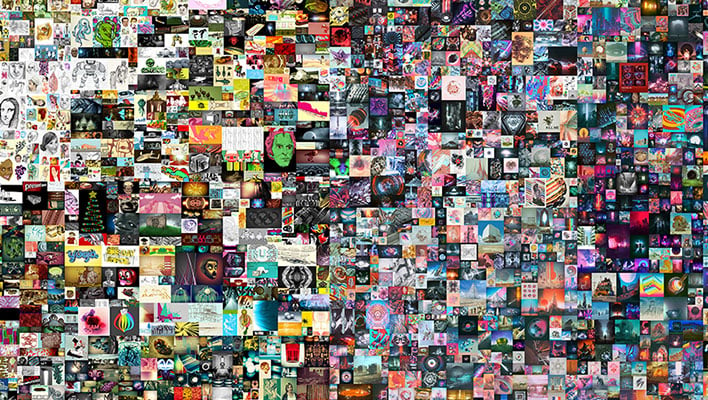 Shown above, the digital artwork is called "Everydays: The First 5000 Days," and it is a collage of 5,000 images stitched together. Beeple made a new image each day for the past 13 years. Like "Crossroads," this is a purely digital piece of NFT work.
"Christie’s is thrilled to have the opportunity to work with Beeple, a brash pioneer among digital artists, to present the first purely digital NFT-based work of art ever offered by a major auction house. We see this as a pivotal moment for the future of New Media and even the practice of collecting itself," says Noah Davis, specialist in Post-War and Contemporary Art at Christie's.
It's basically a JPEG, and an extremely valuable one at that, which checks in at 21,069 x 21,069 pixels. Printing and framing it could be an issue, but then again, the digital bits are hold value, not a printout.