NASA is currently attempting to unclog the bit carousel that houses the core samples taken by the Mars Perseverance rover. It seems that pebble-sized debris is keeping the carousel from operating properly.

Just before the end of 2021, NASA shared a look back on its Mars Perseverance rover and all it had achieved during the year. From the rover taking selfies, to collecting core samples from Mars, the rover had an eventful year. NASA is also preparing a way to return all the samples that the rover will collect from the surface of the red planet. But before it can do that, it will have to figure out how to unclog the carousel that houses those samples, and do it from a control room millions of miles away.

Perseverance successfully cored and extracted a sample from a Mars rock on December 29, 2021. The data that was sent back from the rover indicated that the coring process went smoothly. It wasn't until the transfer of the bit that contains the sample into the rover's bit carousel, that the sensors aboard the rover indicated some sort of anomaly. Performing as it should, the rover shut down the procedure and called for help.

It seems the anomaly happened during what is called "Coring Bit Dropoff." This is when the drill bit, along with its sample tube and just-cored sample inside, is guided out of the percussive drill that is located at the end of the robotic arm, and into the bit carousel where the anomaly occurred. During this process, there is expected to be a bit of drag associated with it. During the previous core samples, the coring bit traveled 5.15 inches (13.1 centimeters) before sensors picked up the expected drag. However, during the last operation the sensor recorded higher resistance than usual about 0.4 inches (1 centimeter) earlier than expected. The resistance that was recorded was also much higher than expected overall. 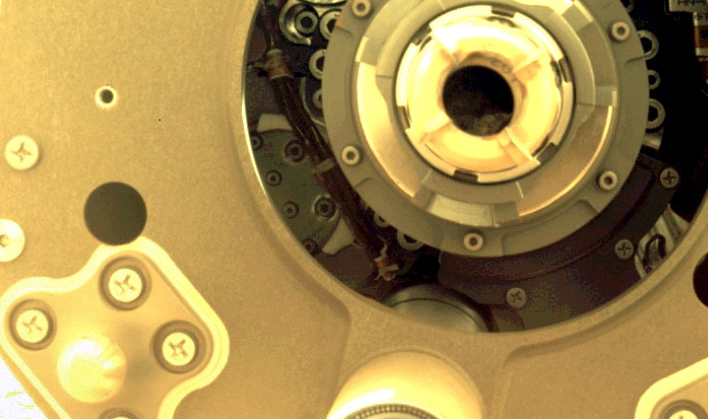 This is only the sixth time in our history that a sample has been cored from a rock on a planet other than our own. So, when NASA spots something anomalous happening it takes it slow. The team back on Earth requested more data and imagery to try and gain a better perspective of what was happening. NASA is currently operating through a set of "restricted Sols" in which the latency of the data restricts the type of activities it can perform on Mars. Therefore, it took about a week to receive additional diagnostic data needed.

Utilizing the new images, NASA teams were able to confirm that inside the bit carousel there were a few pieces of pebble-sized debris. The team is certain that the fragments are from the cored rock that fell out of the sample tube at the time of Coring Bit Dropoff. It is this debris that has prevented the bit from seating completely in the bit carousel.

This is the first time that NASA has had to deal with debris removal and wants to take the time required to ensure the pebbles exit in a controlled and orderly manner. The designers of the carousel did not take into consideration the ability for the carousel to continue to operate successfully with debris.

Louise Jandura, Chief Engineer for Sampling and Caching at NASA/JPL, wrote in a blog, "This is not the first curve Mars has thrown at us, just the latest. One thing we've found is that when the engineering challenge is hundreds of millions of miles away (Mars is currently 215 million miles from Earth), it pays to take your time and be thorough." She continued, "We are going to that here. So that when we do hit the un-paved Martian road again, Perseverance sample collection is also ready to roll."