For quite some time now—since the mid-1990s or thereabouts—there's been a significant split in the PC market between standard consumer desktops and workstation systems, also known as "high-end desktop" (HEDT) systems. HEDT machines, generally speaking, usually offer more high bandwidth connectivity, more cores, and memory capacity than standard desktop platforms. That said, the HEDT market has been in a downturn for a while now, though Intel may finally be bringing its next workstation platform to the market soon.


This idea comes about from a listing at a Canadian retailer known as ATIC. That site put up a page for a SuperMicro X13SWA-TF motherboard based on the Intel W790 chipset, which hasn't been officially-announced yet. The board features an LGA 4677 socket, six PCIe 4.0 x16 slots, a pair of 10-Gigabit Ethernet ports, and packs all of this into the eATX form factor. Yep, that sounds like an HEDT board to us. 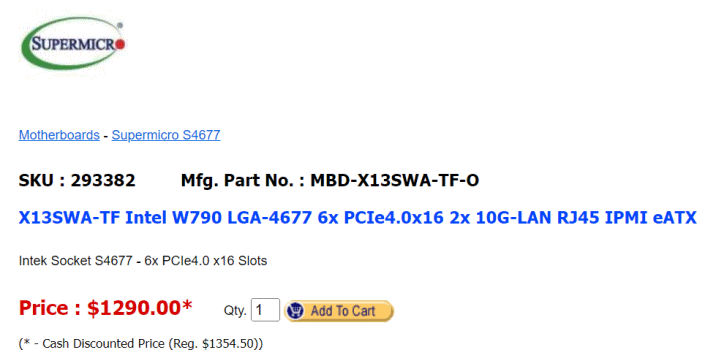 The interesting question is exactly which CPUs will go into this socket. Traditionally, HEDT platforms share most of their technology with the contemporaneous server platform, so we would expect to see Sapphire Rapids CPUs with up to 56 cores slotting into this board—possibly even including the recently-announced Xeon Max HBM CPUs.


However, there is another possibility: remember that fascinating 34-core CPU we saw at Innovation 2022? That was labeled "Raptor Lake-S" despite the CPUs being clearly too large to fit in an LGA 1700 package. It seems likely to us that those could be many-core CPUs based on the same technology as the desktop Raptor Lake parts, and that those CPUs could be bound for a future HEDT platform like W790. 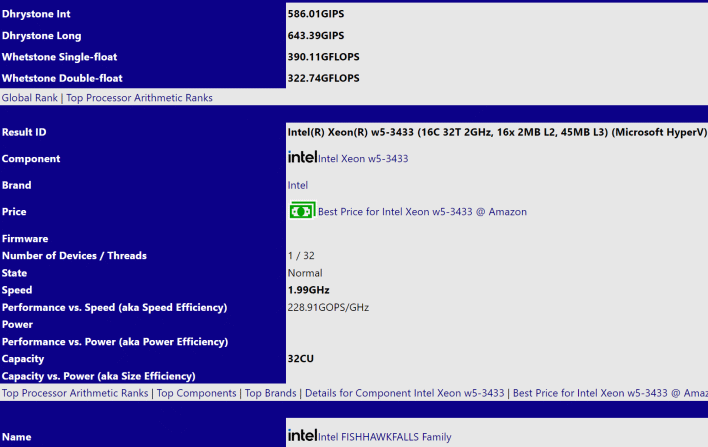 A SiSoft Sandra leak earlier this year revealed the existence of the "Fishhawk Falls" Xeon W5-3433. That is apparently a 16-core CPU with 2MB of L2 cache per core. That sounds pretty familiar, doesn't it? In case you don't get it, Intel's Raptor Lake increased the L2 cache from 1.25MB on Alder Lake to a full 2MB per core. That said, Sapphire Rapids is the same in that specification, so ultimately it still could be either.

We'll know once they come out, but that might be a bit yet. According to WCCFTech, these chips and their platform will be unveiled in February, with availability at the beginning of Q1.